By Professor Paul L Younger FREngg, Rankine Chair of Engineering and Professor of Energy Engineering, University of Glasgow. This article first appeared in the summer 2014 edition of the RSGS's magazine, The Geographer. 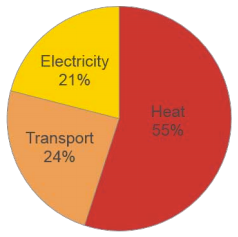 The Scottish First Minister memorably remarked in 2011 that Scotland could come to be seen as “the Saudi Arabia of renewable energy”. Three years later, with the Scottish independence referendum looming, it seems a good time to ask whether this is feasible. The Scottish Government has set ambitious targets to position Scotland in the premier league of renewably-powered nations. In summary, by 2020 the Scottish Government plans to have 30% of total Scottish energy use met by renewable sources. As energy includes heat (55% of Scottish energy use in 2011), transport (24%) and electricity (21%), separate targets for each of these modes have been set.

The electricity target always grabs the limelight: an equivalent of 100% renewable by 2020. This does not mean that all energy consumed in Scotland at that time will be renewable; rather, it effectively means that over a year (say) Scotland will export enough renewably-generated electricity to match the non-renewable element of its domestic consumption. Logically, if we really want to reduce Scotland’s contribution to climate change, we would be prioritising development of renewable heat. However, the 2020 target for renewable heat (11%) is even more modest than that of the UK Government (12%). At present, mainstream suggestions for decarbonising heat invoke electrification, on the assumption that electricity will soon be decarbonised. This would imply increasing the total amount of electricity generated by a factor of 2.5. But will Scotland’s renewable electricity generation be up to the job?

Renewable electricity supply in Scotland has a distinguished pedigree, dating back to the commissioning of the Galloway Hydros scheme in 1935. Many large hydropower systems were constructed in the Highlands during the 1950s, but development then slowed to a trickle, with only one sizeable new hydropower station being built since 1963 (the 100 MW Glendoe system commissioned in 2009). The current total installed hydropower capacity in Scotland is around 1.5 GW.

Estimates from Heriot-Watt University indicate that, given the imperative of conserving scenic glens, this could only be expanded by about 50%, mainly through small schemes. This is frustrating, as hydro is less variable in output than other renewables, albeit it is notably vulnerable to inter-annual variations in rainfall. In 2013, Scotland’s hydropower stock produced around 15.5 petajoules (PJ) of electricity, which amounts to 10.3 PJ per GW installed. This is significantly better than wind, which produced 8.9 PJ per GW installed. Yet even if all of Scotland’s remaining hydropower potential were to be developed over the next few years (which it will not be, given the lead times involved), it could not contribute more than 10% of the additional renewable electricity capacity needed by 2020. 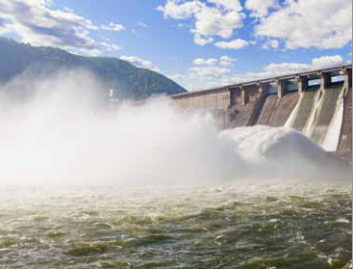 Given Scotland’s weak solar resources (amongst the weakest in sub-polar Europe), and given that wave and tidal technologies remain nascent and exorbitant, wind is the only option for meeting the 2020 renewable electricity target. What does this mean in terms of further expansion of installed wind capacity? Scotland currently uses around 132 PJ of electricity per annum, and given the ambitions for economic growth and expansion of electricity use for heat and transport, we can assume that the 2020 figure will be some way north of this. In 2013, Scotland generated a record amount of electricity from renewable sources: 61.2 PJ, or 46% of Scottish electricity demand.

Given the proven annual productivity of Scottish wind farms, this means that a further 70.8 PJ will have to be generated by wind in 2020, which equates to 9 GW extra installed capacity. This is a realistic prospect: around 4 GW of onshore wind already has consent with a similar amount in planning; 5 GW of offshore wind is also in planning, though the recent cancellation (or ‘postponement for at least a decade’) of the 1.8 GW Argyll Array offshore from Tiree casts some doubt on the degree to which this will be deployed by 2020. Nevertheless, it seems likely that renewable electricity generation in Scotland can indeed meet the 2020 target.

This is where things get interesting though. Due to natural variability of wind speeds, onshore wind in mainland Scotland struggles to exceed a capacity factor of around 30% (ie, the proportion of the time it is actually producing significant amounts of electricity). This means that, even with 100% equivalent renewable capacity installed, some other source of electricity will always be required for more than two-thirds of the time. Thus, ensuring a 24/7 power supply will always need a combination of baseload (ie, constantly-available) and dispatchable (ie, available on demand) electricity sources. (Electricity storage also has a role to play, but it is sufficiently costly that it is difficult to see this expanding beyond the niche application of marginal load balancing). The problem is that most baseload and dispatchable sources of power cannot be switched on or off within the timescales over which wind output fluctuates.

Much of Scotland’s baseload is provided by its two remaining nuclear power stations, Hunterston B and Torness, which between them produced 34.5% of Scotland’s electrical output in 2012. Some baseload, and virtually all of the dispatchable output, was provided by just two power stations: Longannet (coal-fired, 25%) and Peterhead (gas-fired, 8%). Although the outputs of these fossil-fired power stations can be tweaked over a timescale of hours, they cannot be adjusted instantaneously as wind speeds wax and wane. Thus when we say Scotland produced 46% of all its electricity renewably in 2013, we need to be clear that much of this had to be exported to England. Indeed, Scotland’s 100% renewable electricity target is absolutely dependent on it continuing to export to England.

The net export in 2012 was 26.1%; yet there are early signs of changing fortunes for Scotland’s electricity export business. The four remaining non-renewable power stations in Scotland were until recently five: Cockenzie (coal-fired) closed in 2013 and will shortly be demolished. Since Cockenzie was taken off-line, Scotland has begun to experience periods in which it is reliant on electricity transfers from England. This happened on about ten days in 2013.

The Scotland-England interconnectors have hitherto always flowed N-S. This change in polarity represents the increasingly tight margins of baseload and dispatchable capacity in Scotland. At present, no new power stations with such capability are under construction in Scotland. Moreover, under current plans Scotland will lose its two nuclear power stations in 2023 – and with them a third of its electricity output, and the core of its baseload. Meanwhile, Longannet is ageing (it was originally commissioned in 1973), and notwithstanding recent upgrades, it is not currently expected to remain in service beyond 2025. Scottish Government policy precludes any replacement nuclear or coal-fired power stations, so in little more than a decade almost all of Scotland’s baseload and dispatchable generation capacity will have gone. That already leaves us barely enough time to design, obtain consent for, and construct alternatives. The only alternative of sufficient scale deployable to such a deadline is gas-fired generation.

Unless unconventional gas developments are permitted and succeed, Scotland will continue to be poorly endowed with natural gas resources. The majority of the North Sea gas fields are offshore England. Gas separated from Scotland’s oil fields is currently burned for power generation at only one site. Yet Peterhead has seen steady decline in capacity, from 2.2 GW in the early 2000s, to 1.1 GW in 2010; by April 2014 it was just 0.4 GW. These reductions have been ascribed to uncertainty over future prices for fossil-fired generation, coupled with transmission cost penalties for power stations in remote locations.  Neither of these factors auger well for construction of replacement, non-coal, non-nuclear, baseload or dispatchable capacity in Scotland within the next decade.

But does this matter? Can’t England provide these services to Scotland, while Scotland virtuously sticks to renewable generation alone? The current connector capacity is nominally 4.4 GW, though in practice this is limited to 3.3 GW due to thermal stability problems. A new 2.2 GW connector from Hunterston to North Wales is currently under construction.

We can therefore rely on an England-Scotland connector capacity of around 5.5 GW: this amounts to just 40% of Scottish peak demand, and closely approximates the amount of power output currently coming from Scotland’s nuclear and fossil-fired power stations (5.4 GW). There is no room for manoeuvre, and no guarantee that England (which has similar problems of its own) will have the spare capacity to feed power north when Scotland stands in need. We live in interesting times.
Posted by RSGS at 11:00